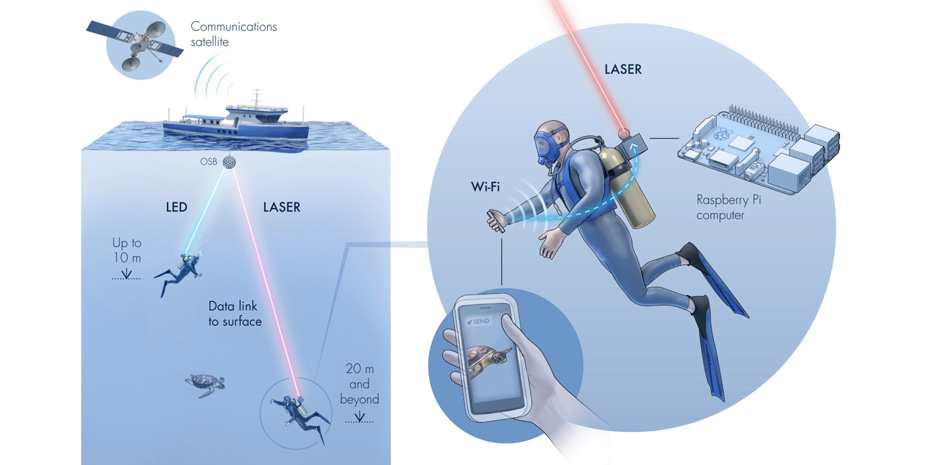 A team of researchers working out of the King Abdullah University of Science and Technology (KAUST) have developed a two-way wireless data connection for use underwater. Strong wireless data connections are basically taken for granted in our daily lives, from cell service to home Wi-Fi networks, but it’s actually tremendously challenging to create high-speed wireless connections in a medium like water. That could be very valuable for keeping underwater data centers connected with surface network infrastructure.

KUAST’s researchers approached the challenge using simple, readily available off-the-shelf components, including a Raspberry Pi that acts as the modem. They also built it to be compatible with existing 802.11 wireless standards, so that it can easily connect into the larger global internet for consistent and reliable connections.

The Raspberry Pi provides the compute needed to convert the standard wireless signal into one that can be transmitted optically via laser. The signal comes in over the air to a buoy at the ocean’s surface, where the Pi then does the conversion and transmits the information via blue and green lasers, which then beam it down to an optical receiver located underwater, with a maximum practical transfer speed of 2.11 Mbps across a distance of 20 meters (around 66 feet).

The research team managed to use their system to do Skype  calls and move files back and forth — but they also burned out the Raspberry Pi using lasers that overwhelmed its capabilities. This could be shored up by swapping in a dedicated optical modem, they said. A bigger problem that exists when using this so-called Aqua-Fi networking tech is dealing with the optical variation that can result underwater from currents and water movement.

To overcome those limitations, the team is considering a number of options, including a two-laser system in which a low-powered one plots the course for the more powerful data connection, and can readjust orientation if a connection fails. They could also broaden the receiver with an array of multiple receivers — similar to how MIMO antenna arrays work on modern networking hardware.